Islamabad (Press Release)Federal Board of Revenue has launched Parliamentarians’ Tax Directory for Tax Year-2019 in a special ceremony organized at FBR (HQs), this afternoon. Federal Minister for Finance and Revenue, Shaukat Fayaz Ahmed Tarin, was the Chief Guest on this momentous occasion, who formally launched the Tax Directory after his brief address to the participants. Chairman FBR/Secretary Revenue Division, Dr. Muhammad Ashfaq Ahmed, all Members and senior officers of FBR were present on the occasion.

In his concluding remarks, Federal Minister for Finance & Revenue Shaukat Tarin congratulated FBR on the publication of Parliamentarians’ Tax Directory for Tax Year 2019. “This is yet another milestone achieved by this government for ensuring transparency and promoting tax compliance,” he remarked.

He further added that governments around the world required sufficient revenue for running the affairs of the state, such as provision of public services, social sector development and defense etc. He reiterated that there was an urgent need for a fair, equitable and transparent taxation system to build a unified and prosperous society. “For this purpose, it was necessary that the lawmakers pay their due amount of tax and, thus, set an example for others to also discharge their national obligation,” he reaffirmed.

He further explained that in pursuance of the objectives of setting high standards of transparency and promote better economic management of the tax system, the Federal Board of Revenue published the first ever tax directory of the honorable Parliamentarians for Tax Year, 2013. This was greatly appreciated by the media and the public at large. Subsequently, tax directories of Parliamentarians were also published for the tax years from 2014 to 2018, which created a sense of public awareness, motivation and transparency. This time, in line with the government’s reform agenda, special efforts have been made to render the Directory clearer and more informative, which will help not only in educating the taxpayers but also in encouraging compliance of tax laws as a national duty.

Earlier, Chairman FBR/Secretary Revenue Division in his welcome address highlighted the salient features of Parliamentarians’ Tax Directory for Tax Year-2019. He clarified that the incumbent government had decided to continue this initiative and publish Tax Directory for Tax Year, 2019 after making certain important improvements. “In the previous format, only the amount tax paid by parliamentarians was reflected which caused a lot of confusion.” Therefore, learning from the past experience and with the prior approval of the government, additional columns have been added to show the income under different categories i.e. normal, presumptive and agriculture. Likewise, last year total tax payment by an AOP was shown in which the honorable Parliamentarian was a member, this too created confusion. This year, on advice of the Cabinet, share of the parliamentarians’ tax paid by an AOP has also been shown, he continued. 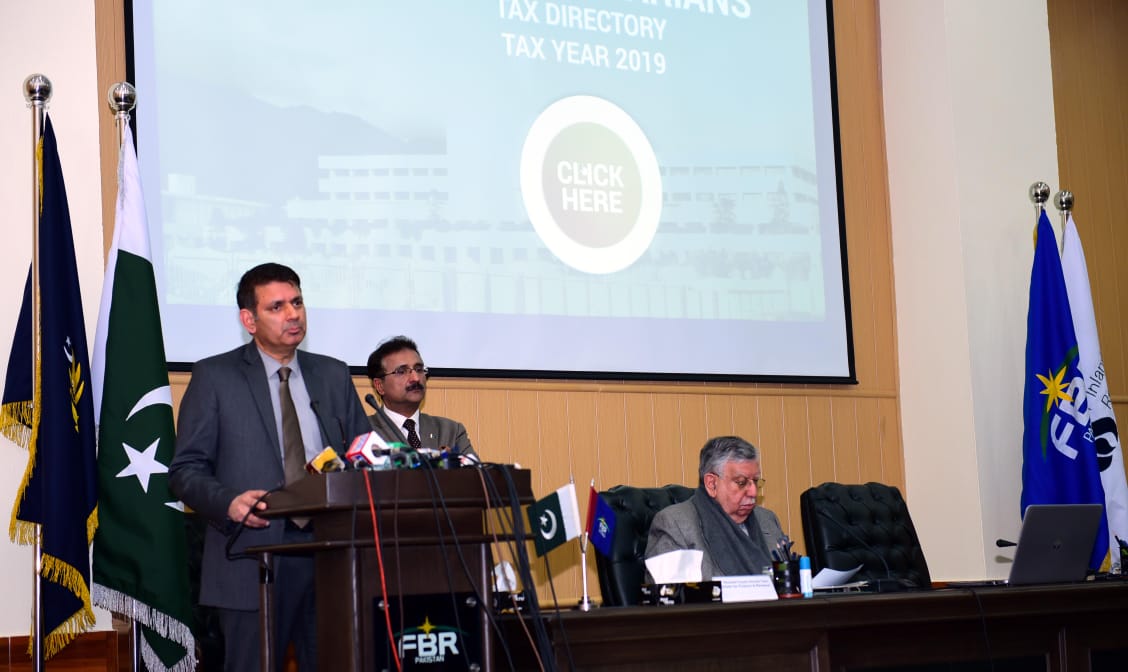 At the end, Chairman FBR further explained that FBR had tried its best to minimize mistakes. However, in case of any human or technological error, the honorable parliamentarians could approach FBR for updating their tax record. He also stated that the Parliamentarians’ Tax Directory for Tax Year, 2020 would also be published in due course.