BEIJING, (Xinhua) Amid the weakening of global consensus on opening up, President Xi Jinping made fresh pledges Thursday to open the Chinese market wider as the country has fully delivered on its accession commitments to World Trade Organization (WTO).

Noting that globalization is facing headwinds, Xi expressed concern over the decline of an index on world openness in the past decade while addressing the opening ceremony of the fourth China International Import Expo (CIIE).

"We must stay on top of the prevailing trend of economic globalization, and support countries around the world in opening up wider while rejecting unilateralism and protectionism. This is significantly important if we are to take humanity to a better future,” Xi said.

"Opening up is the hallmark of contemporary China,” Xi told officials, business leaders and entrepreneurs participating in this year’s CIIE.

As part of the country’s efforts to safeguard true multilateralism, Xi said China will uphold the position of the multilateral trading regime as the main channel for international rules-setting, and safeguard the stability of global industrial and supply chains. 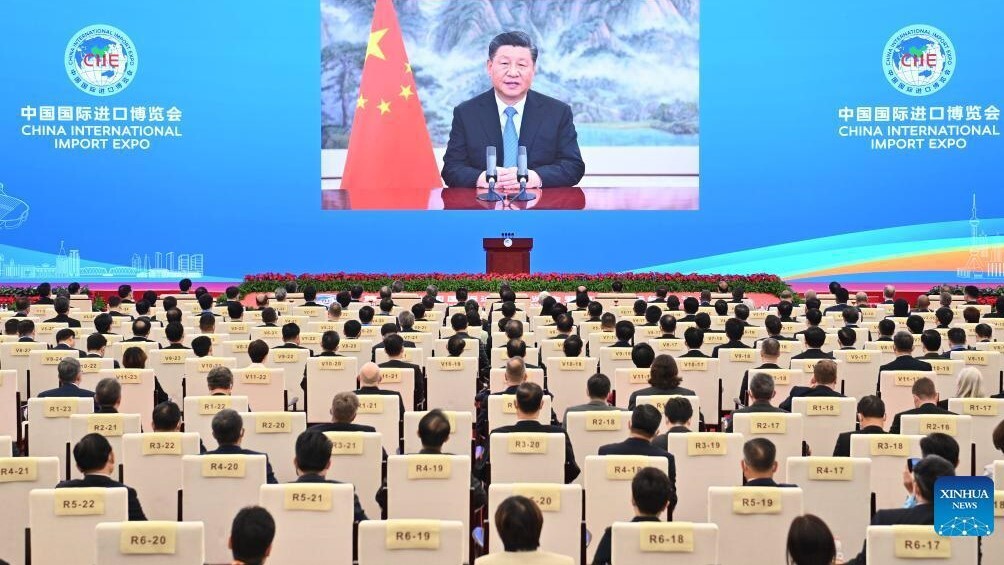 China will also take an active and open attitude in negotiations on issues such as the digital economy, trade and the environment, industrial subsidies and state-owned enterprises, he said.

With a population of 1.4 billion and over 400 million middle-incomers, China will share market opportunities with the rest of the world via measures such as opening more demonstration zones for creative promotion of import trade and promoting Silk Road e-commerce, Xi said.

To firmly promote high-standard opening up, China will further shorten the negative list for foreign investment, and expand the opening of telecommunication, healthcare and other services in an orderly fashion, according to the president.

"China will firmly uphold the common interests of the world,” he said, pledging to actively join in global efforts to tackle climate change and safeguard food and energy security, and provide more assistance to fellow developing countries within the framework of South-South cooperation.

The year of 2021 marks the 20th anniversary of China’s accession to the WTO. Over the last two decades, the country’s continuous efforts in widening opening-up have brought its development to a new stage and injected fresh impetus into the world economy, Xi noted.

"China has fully delivered on its accession commitments,” Xi said.

China’s overall tariff rate has been cut from 15.3 percent to 7.4 percent, lower than the 9.8 percent accession commitment, delivering dividends to its trade partners all over the world.

In the past 20 years, China’s global ranking of trade in goods has risen from the sixth to the first, while that of its trade in services has jumped from the 11th to the second.

The country’s development and progress since it entered the WTO is the result of much hard work and great tenacity of the Chinese people under the strong leadership of the Communist Party of China and the country’s proactive steps to strengthen international cooperation and work for win-win outcomes, Xi said.

As the world’s first import-themed national-level expo, China’s CIIE has offered a platform for entrepreneurs and traders worldwide. This year’s CIIE draws nearly 3,000 businesses from 127 countries and regions, higher than its last edition.

"As a European company in China for over 30 years, we have witnessed China’s continuous efforts to deepen opening up and improve the business environment since its accession to the WTO. We have full confidence in China’s development and future,” said Tony Wei, Managing Director of Business Services and Managing Director of Swarovski Crystal Business, Greater China. Enditem